Accueil » Défense des intérêts » How do I report a sexist or sexual advertisement or message?

Are you outraged by openly sexist material in the media? Are you shocked by sexist or degrading advertising that violates the integrity of women or men?

There is always a way to report it!

It seems that consumers of all genders are more against overtly sexist messages; however, advertising continues to portray women and men in stereotypical roles. This is perhaps even more pernicious now, as it is more difficult to identify. Be aware that it is possible to file a complaint to combat the proliferation of sexist images and gender stereotypes.

These images are representative of our world, so being able to analyze them allows us to better understand our society, and especially to see behind the interpretation of those men and women who create the images.

If gender-based stereotypes in sexist advertising has not evolved much, the use of digital technology has changed, making it more accessible to file a complaint.

At the request of the Secrétariat à la condition féminine du Québec, we have updated our Companion Guide to filing a complaint agains sexist and sexual images and messages in the media to explain the procedures to follow.

Consult the Companion Guide, for all the information you will need to prepare and send your complaint. 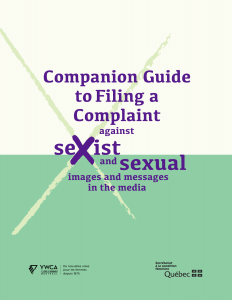 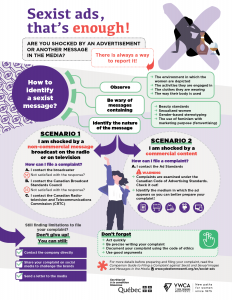 How to recognize sexist messages?

Be wary of messages containing

How do I file a complaint against a sexist or sexual advertisement or message?

Filing a complaint can help change behaviour! Make sure you follow the correct procedures by referring to the Companion Guide before submitting your complaint.

Identify the nature of the message

First, it is important to determine whether the offending content was broadcast as part of an advertisement or a non-commercial message.

For a non-commercial message heard during a radio or television broadcast contact the concerned media outlet directly. See Scenario 1.

If it is a commercial advertisement, regardless of the medium, you must contact Ad Standards. See Scenario 2.

Send a letter or an email to the broadcaster describing your concerns: list the facts and highlight the terms used. This is how many complaints are resolved.

For a list of elements to include in your message, refer to the Companion Guide (p.11).

Act quickly! You must send your complaint to the institutions in the three weeks following the broadcasting.

Are you not satisfied with the broadcaster’s response or is is taking too much time? Proceed to step B.

This is a voluntary self-regulating organization created by private Canadian broadcasters to deal with complaints by listeners and viewers regarding broadcasts that they have heard or seen on one of the participating stations. The latter constitutes the majority of Canadian private sector radio and television stations.

Check if the broadcaster is an associate of the CBSC.

In what cases should a complaint be filed?

When a television or radio show includes content that:

To help you prepare your complaint, you can refer to excerpts from previous decisions in the Companion Guide (p.12).

The importance of context for categorizing a complaint

With regard to Clause 10 of the Code on fair representation regarding contextual factors, in certain cases, the CBSC will not necessarily identify something as an offence. It’s important to document the arguments submitted in support of a complaint.

The relevant provisions of the Canadian Code of Advertising Standards can be found in Appendix 1 of the Companion Guide (p.22).

How do I submit a complaint to the CBSC?

Are you not satisfied with the CBSC’s response? Proceed to step C.

The CRTC is an administrative tribunal that regulates and supervises broadcasting and telecommunications in the public interest. Contact the CRTC as a last resort. Address this organization when all other avenues have failed.

When should I file a complaint?

When the media violates broadcasting and telecommunications laws, policies or regulations, or licence conditions.

You must submit a complaint regarding a program within four weeks following its broadcasting.

How do I submit a complaint to the CRTC?

There is no online complaint form. All complaints pertaining to broadcasts must be submitted in writing.

If you submit a complaint over the phone, you must also send in written version.

The relevant organization is Ad Standards. It receives all complaints, regardless of the supporting media. Your complaint must relate to a recent ad, that you saw less than three months ago, in order to be easily identified by the Ad Standards.

This Code applies to advertising for products and services that appear in any type of media (radio, television, newspapers, magazines, billboards, online, brochures, etc.). It does not apply to foreign media.

Ad Standards accepts complaints submitted by the Online Complaint Submission Form or by mail. Explain the reason or basis for your complaint, as well as where the provisions under the Code apply.

You will find the applicable provisions of The Canadian Code of Advertising Standards in Appendix 2 of the Companion Guide (p.25).

In order to determine whether or not an advertisement is sexist, ask yourself the following questions:

Identify the type of media in which the advertisement appears in order to properly prepare your complaint!

For broadcast advertisements: identify the station, time and date on/at which you saw/heard the commercial and provide a brief description of the commercial.

For Internet advertisements: identify the date of viewing, website, and include a print-out of the advertisement and other applicable web pages (if any).

Refer to the Companion Guide (p.15) for a list of information that must be included in your complaint.

How do I submit a complaint with Ad Standards?

Don’t give up! You can still:

Share your complaint on social media to challenge the brands

Send a letter to the media

Act as quickly as possible!

The CBSC and the CRTC make their decision on the basis of an audio or video recording. Radio and television stations are under no obligation to keep audio or video files for more than four weeks following the broadcast. It is therefore important to act quickly, particularly for programs or advertisements.

Use great precision when submitting your complaint

Identify the terms used in the radio or television broadcast or in the advertisement. Focus on the facts: it is better to define your concerns. It is essential to demonstrate which scenes or statements are degrading, offensive, insulting, sexist or discriminating towards certain social groups (regarding their identity and their role in society).

If possible, check the CBSC site to view the list of panel decisions already made.

What not to do

The challenge is to effectively show your outrage and to put forth an argument that does not include:

If, for example, you are targeting a program, avoid criticizing other things, such as society in general, or media that promotes a poor image of certain social groups.

It is not about showing indignation in response to sex scenes that are not discriminatory or exploitive.

You cannot file a complaint about an advertisement that is no longer on display or being broadcast.

Be sure to not submit a complaint about an advertisement that does not fall under the mandate of the Ad Standards, namely: The Code does not apply to: packaging, wrappers and labels; political and election advertising; foreign media.

What can I do if my complaint is not receivable through the official process?

Do not lose your hope, there are always solutions. First you can try to contact directly the company that made the ads to talk about your concern.

Let’s be vigilant! Filing a complaint is taking action!

Even beyond the process of submitting a complaint, we have to learn to train our critical senses. Are we asking the right questions? Who are the people behind these images? What is the message they are trying to convey, consciously or not? Let’s remember that in advertising, brands mainly want to convince us to buy their products.

Now that you know how to proceed, the ball is in your court.

Make sure you follow the appropriate procedures by referring to the Companion Guide before submitting your complaint.