While thinking about the messages we would post on our different platforms to mark International Women’s Rights Day, we felt a sense of immense anger, but also extreme fatigue. An unpleasant feeling of already having seen it, written it, denounced it… What could we say that hadn’t already been said?

Millions of women have spoken.

Accusations of online sexual exploitation have increased by 81%.

More than 80% of these cases involve young girls.

Another wave of femicides.

Approximately 11 women per year are victims of femicide in Quebec. 5 women lost their lives at the hands of their (ex) partner in Quebec between February 5 and March 1st, 2021.

Crisis in women’s shelters due to a lack of resources.

In 2020, the Fédération des maisons d’hébergement pour femmes and the Regroupement des maisons pour femmes victimes de violence conjugale had to decline thousands of requests for emergency shelters due to a lack of resources and space.

Lack of affordable housing to escape situations of domestic violence.

Getting out of a situation like this is so difficult when the average monthly rent for a 2‑bedroom unit in the Greater Montreal area is $1,320 or $1,520 for a larger unit, and there are already more than 22,000 families on a waiting list for affordable housing.

The pandemic has disproportionately impacted women.

Women are most affected when it comes to COVID among healthcare and essential services workers. Unlike everywhere else, in Quebec, the life expectancy of women has actually dropped and is lower than that of men. In addition, the slowdown in the service sector and job losses are felt more acutely by women. Economic recovery plans don’t seem to be taking these differences into account. And yet, proposals have been made.

In short, what can we say that wasn’t already said in our open letter from almost a year-and-a-half ago? Well here it is. We suggest you read it again… 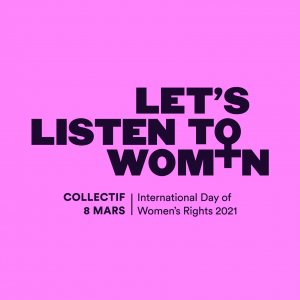