Housing vacancy rates reached 1.9% in Montreal in June 2019, the lowest in years. This rate dropped to 0.8% for family housing with three bedrooms or more.

The City of Montreal has taken action and has promised to develop 12,000 affordable social housing units by 2022 [1]. A new bylaw has just been unveiled in which housing developers will be required to set aside 20% of all large housing projects for social housing, 20% for affordable housing, and 20% for family-size units.

The new bylaw intends to reduce the cost of units having three bedrooms or more for low-income families.  The government of Canada has put in place a strategy to implement initiatives that seek to address the housing need across the country.

A gender-based analysis must be part of the solution

Affordable housing policies adopted by the City of Montreal and the Government of Canada, such as the Bylaw for a diverse metropolis [2] and the National Housing Strategy [3], are promising, but must take into consideration the situations faced by women. Five times more women spend more than 30% of their income on housing than men do [4].

While they are responsible for more than half the rental households, women are always at a greater risk of being inadequately housed, particularly because they experience higher poverty rates, and a greater number live in housing insecurity. [5]

The situation is even more critical for women who are young, older, immigrant or racialized, native or handicapped. These minorities, in addition to having to spend a large portion of their budget on housing, tend to suffer more housing insecurity and must deal with situations of blatant discrimination [6].

The need for single-sex, long-term, safe and affordable housing for women is glaring and has clogged emergency shelters. Incidentally, there are less shelters intended solely for women (only 16% in Montreal). They also receive three times less funding than emergency shelters for men, despite the fact that they provide shelter to a higher rate of women (103.9% women compared to 85% men) [7].

In almost all walks of life, merely being a woman continues to be a risk factor. The YWCA believes that access to safe housing is a fundamental right and that an intersectional analysis of the challenges and needs specific to women must be applied when considering the affordable housing shortage.

Furthermore, the YWCA believes that a strong network constitutes a key factor in supporting inclusion. In this sense, community support with respect to social housing is an essential component in the housing stability of women that should not be neglected when funding housing development projects [8]. 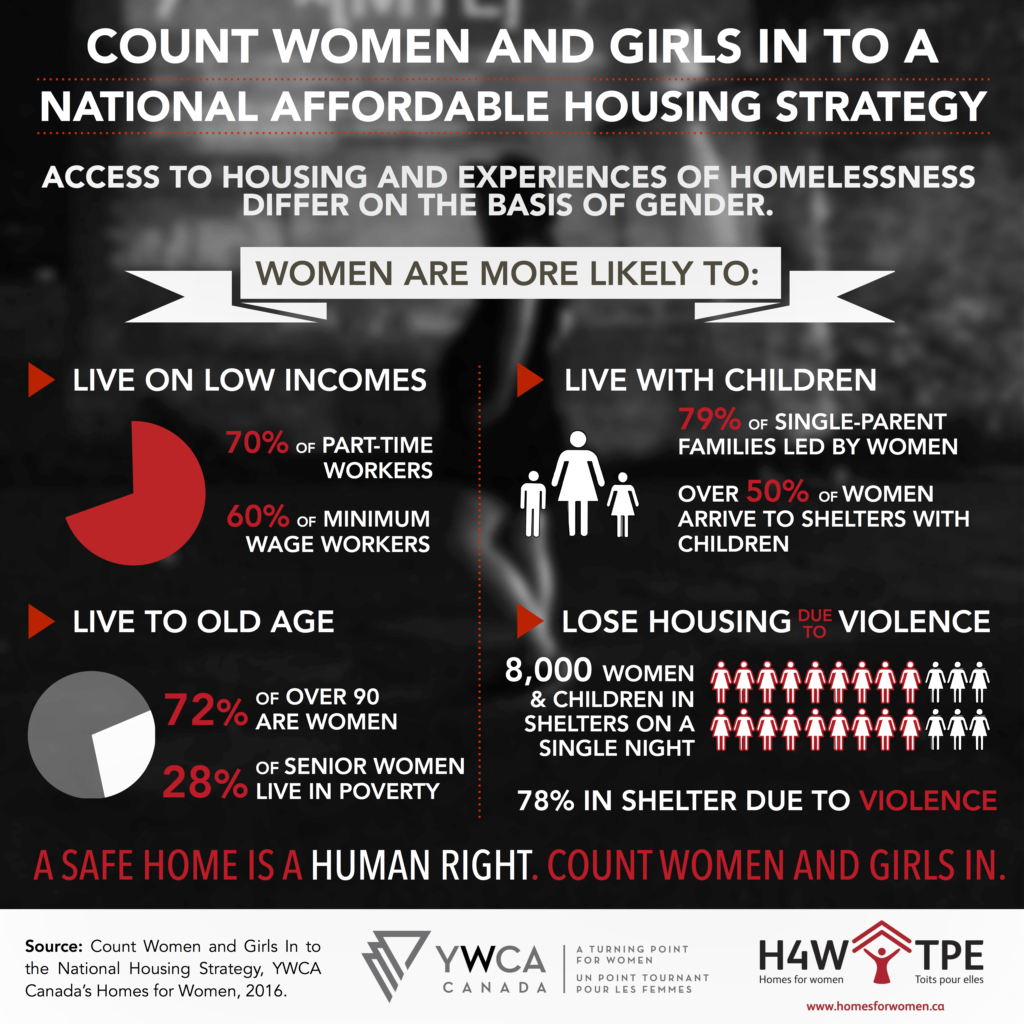